Only People of Delhi will be Treated in Delhi Hospitals: Arvind Kejriwal 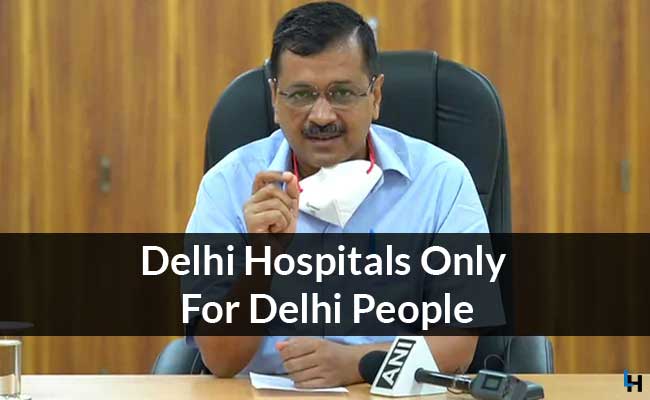 Amid the increasing corona cases in Delhi, the Delhi cabinet has decided that only Delhi residents will be treated in Delhi government and private hospitals, while all will be treated in central government hospitals. Arvind Kejriwal gave this information after holding a press conference. He said that along with this, borders will be opened for all people outside Delhi. He said that decisions have been taken due to increasing cases in Delhi.

He said that people across the country will be able to get treatment in central government hospitals. According to Arvind Kejriwal, by the end of June, 15,000 beds will be needed in Delhi, whereas we have only 10,000 beds. In such a situation, it will not be possible to open hospitals for everyone.

He said that till the month of March, all the hospitals in Delhi remained open to the people of the whole country. At any given time, 60 to 70 percent of the people in our Delhi hospitals were from outside Delhi, but the corona cases are increasing rapidly. In such a situation, your government is arranging beds. In such a situation, what will happen to Delhi people if they open hospitals in Delhi. 90 percent people of Delhi said that as long as there is a cry, only Delhiites should be treated in Delhi hospitals.

He said that a committee of 5 doctors was formed and he has given his report. The committee has said that Delhi will need 15,000 beds by the end of June. He says that at present, Delhi hospitals should be for the residents of Delhi and not for the outsiders, if opened for the outsiders, then all the beds will be filled in 3 days.

Arvind Kejriwal said that since tomorrow, the Restaurant Mall religious places are opening in Delhi. All the precautions that the central government has asked to take will be necessary. Although he made it clear that the hotel and banquet hall would not open in Delhi, he said that in view of the growing Corona case, in the coming time, the hotel and banquet hall may have to be attached to the hospital. Appealing to the elders, he said that with folded hands to all the elders, pleaded that you believe that the lock down is still applicable for you.

The number of people who have recovered is 10,664. There were no deaths in Delhi in the last twenty four hours, but between 25 May and 5 June, there were late reports of 53 deaths, after which the total death toll has increased from 708 to 761.

Delhi’s Theaters are reopening from tomorrow. Check out the Guidelines

Delhi Metro Timings: Delhi Metro will run on its old-time from 6 am to 11 pm