Does Diabetes Affect the Body’s Immunity? 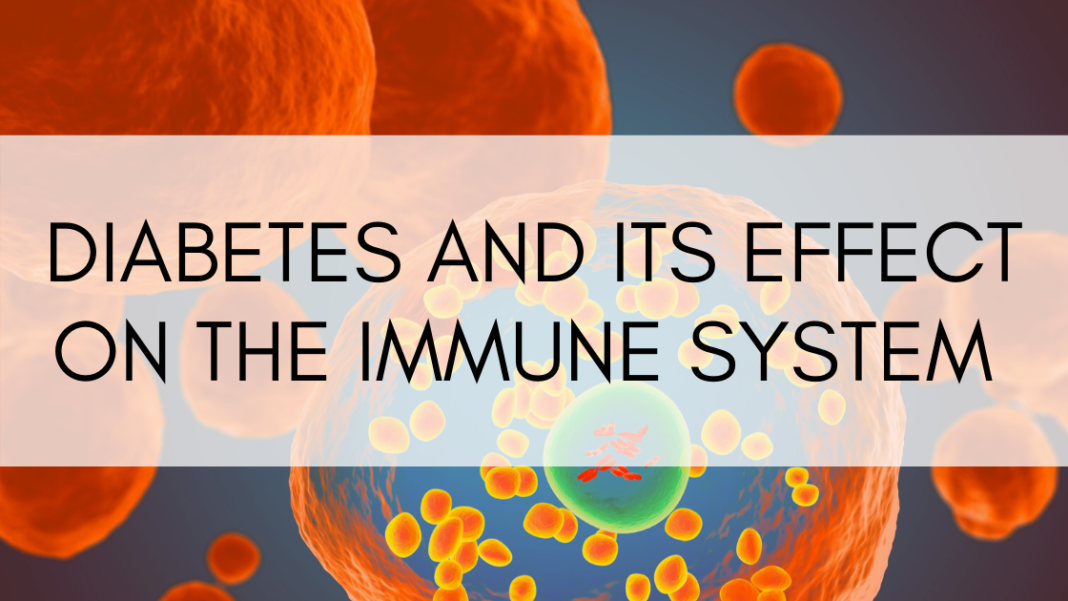 Diabetes is a metabolic disease. This means diabetes has the potential to hamper your body’s metabolism and weaken your immunity.

The immune system serves as the body’s line of defence against infection and disease. It recognizes germs and viruses and defends us by taking an appropriate response.

Diabetes can lead to atherosclerosis, a condition in which fat accumulates inside blood vessels and arteries.

These fat deposits, known as plaque, cause the hardening and narrowing of blood vessels, reducing the ability of white blood cells to reach the site of infection, stay there, and kill bacteria and viruses.

This causes wound healing to be delayed and increase vulnerability to subsequent infections.

Neutrophils are critical in mediating the host’s immune response to bacterial infections.

They are the first leukocytes to arrive at the infected site and begin fighting the infection. However, high sugar limits and de-regulate neutrophil synthesis in the body.

Diabetes impairs neutrophil production and maturation in the bone marrow, resulting in a decrease in blood neutrophil count. High blood sugar also impairs leukocytes’ ability to mobilize and reach the site of infection, as well as stimulates apoptosis, or the process of removing unwanted cells through programmed cell death.

Our immune system is not complete without the complement system. It improves the capacity of antibodies and phagocytic cells to combat and get rid of pathogenic microorganisms in our bodies. However, hyperglycemia, or high blood sugar, affects the ability of complement receptors to trigger phagocytosis by causing abnormalities in them.

The body’s natural defenses are hampered by hyperglycemia’s promotion of the formation of harmful chemicals, which also impair the body’s capacity to combat inflammation and infection. The body’s compromised defensive system allows for bacterial and viral infections.

How to Increase Your Immunity

It’s crucial to have a balanced, healthy diet that includes fruit, vegetables, whole grains, and protein. Particularly for diabetics, processed foods and those high in refined sugars should be avoided.

Vit C, B6, and E are three vitamins that are crucial for immunity building. Amla, lemon, oranges, grapefruits, tangerines, strawberries, bell peppers, spinach, kale, and broccoli are some examples of foods high in vitamin C.

Supporting metabolic processes in the immune system requires vitamin B6. Green veggies and chickpeas both contain it. Strong antioxidant vitamin E aids the body in warding off disease. Nuts, seeds, and spinach are foods high in vitamin E.

You can also try some supplements. It is important to consult your doctor or health coach before starting any new medicines.

The Shilajit capsules from Upakarma Ayurveda are an excellent source of nutrients and vitality for the body. Shilajit, several minerals, and various other organic compounds are some of its naturally occurring constituents. We are the leading supplier of pure and authentic Shilajit capsules in India. You can try Upkarma pure shilajit or upkarma shilajit resin along with the following other measures to boost your immune system.

Physical exercise aids in the body’s detoxification and cleansing, which lowers the risk of illness. White blood cells and antibodies are both affected by exercise (WBC). WBCs are the immune system’s disease-fighting cells in the body. Exercise benefits diabetics in several ways, including lowering blood sugar levels and boosting strength and stamina.

The macronutrients—carbohydrates, protein, fat, and fiber—must also be consumed in the proper amounts and can be found in whole grains, a variety of pulses and dals, fruits, cold-pressed oils, nuts, and seeds.

Note: Avoid skipping meals or eating later than usual because doing so can cause a low blood sugar episode. Always have glucose pills and snacks on hand. Avoid eating ice cream, chocolate, or other foods high in fat when your blood sugar is low since the fat will delay the release of glucose, making it harder for it to rise quickly.

Your Guide to Continuous Glucose Monitoring

Worrying Signs That Might Indicate Heart Defects in Children

Spectrum of Heart Diseases in Infants

5 Tips to Help You Stay Healthy with Diabetes